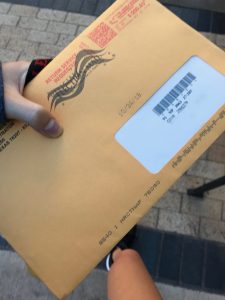 This is my college kid’s absentee ballot. It might as well be a ticket to the super bowl. It was that hard to obtain. She got it yesterday. Mailed it back this morning.

The maze of websites takes a PhD to navigate. I’ve traded tweets with other college moms on Twitter. “When is it due? October 26? November 6? November 13?”

The answer is: postmarked by November 6.

If it hadn’t arrived, Louisa had already conned two friends to drive her home on election day, a twelve-hour roundtrip. Her right to vote was equally important to her classmates.

I’m so tired of hearing how young adults aren’t involved in the world, how they don’t care about the future, about others. It isn’t true, but it may be what a segment of society wants.

According to Newsweek, early voting among those under 30 is up 508% since 2014. IN TEXAS. The journalist credits Beto O’Rourke. He’s great, but who could blame the kids? Ted Cruz voted against Pell Grants and health insurance. He voted for a Secretary of Education that supports predatory college loan operations.

Their future hangs in the balance.

Louisa and her friends are passionate about their world. They are a smarter, a more tolerant, a more engaged generation.

It’s time to quit expecting the worst from them because they’re young.