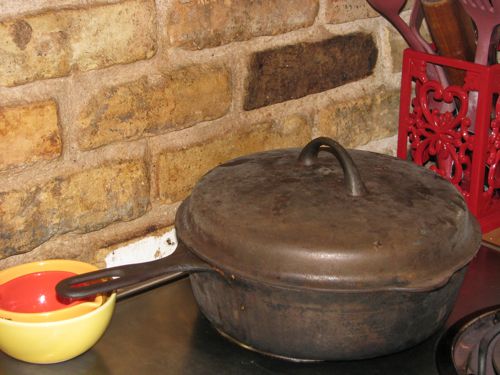 My favorite pan is a deep iron skillet with a lid. Empty, it weighs close to ten pounds. I bought it from an elderly Mexican-American gentleman for $3.00. He was moving to assisted living. He no longer needed his fried chicken pan, and he wanted to sell it to a real cook. I must have passed the test.

The pan is special for its origin, but also for its utility. The heavy iron conducts heat better than any other. At high altitude–on a mountain camping trip–it will bake cornbread atop a Coleman stove. At home, spaghetti sauce simmers with almost no flame. Another cook might complain that it’s too heavy to heft from burner to oven. But the way I see it, that’s the pan’s grace.

The skillet’s usefulness will surely out live me. Someday, I’ll pass it on to another real cook.

Cornbread for My Brother, George

Brown the meat in an iron skillet. Add onions, chilis, and spices. Cook until the onions are soft. In a separate bowl combine the cornbread mix, egg, and creamed corn. Pour the mixture over the meat. Spread to the edges, but do not stir. Bake uncovered for 50 minutes in a 400 degree oven. A knife inserted into the middle should come out clean. Cool for fifteen minutes. Slice into wedges. Serve with salsa.