Coco got Princess Jasmine glasses this week.  I let her pick the glittery pink specs with the dangling jewel charm on the side.  She has good vision without them.  The glasses are a precautionary measure.  Coco was born with infantile strabismus.  What that means in layman’s terms is that she had crossed eyes.

When we brought her home from China, she was 17 months old.  That first month, I took her to apply for a social security card. The guard at the federal building asked, “What’s wrong with your baby?”  Most people didn’t ask.  They just stared.

The first time we saw Coco’s picture was at the adoption agency.  After a long ride through terrible traffic, we were presented with her file.  We’d been waiting for this moment for 16 months.  Breathless and cranky with anticipation, I was like a pregnant woman long overdue. I wanted to scream. GIVE ME MY BABY NOW!

The agency staffer barely looked up when she tossed a folder at us. “She has a lazy eye.” Before we could ask anything, she turned to talk to someone else.

I stared at the picture of an infant with blotchy excema and eyes so severely crossed, she looked terror-stricken. I felt like I’d been punched in the gut. I couldn’t breathe.  I began flipping the pages. (As if I could read anything, the documents were written in Chinese.)  Bacon watched over my shoulder while our three-year-old, Cherry, sat at our feet on the office floor.

Then, I saw it.  Coco’s Chinese name is Xiao Min.

“She’s ours.  This is our baby.” I looked at Bacon. He knew she was ours. He didn’t need my confirmation.

“She has Cherry’s name, Min. It’s the same character.”

Cherry’s name is Fu Min. It means happy smart one.  Xiao Min means little smart one.  The picture of the cross-eyed baby wasn’t reassuring, but the name was. If she wasn’t my daughter, she was definitely Cherry’s sister.

Bacon turned to the clerk, “Where do I sign?”

“What?” The twenty-something career girl couldn’t comprehend the magnitude of what was happening to us.

“I need a pen to sign my daughter’s referral papers.” Bacon’s voice was firm and decisive.

“Oh, you want her anyway?”  Her voice wasn’t as mean as it was vacant, without intelligence.

Bacon separated the words as he pronounced them. He raised his volume as if she couldn’t hear.  “She’s our daughter.  Get me a pen.” My guy is a large, powerful person, but he is careful not to use his size to intimidate.  At this moment, he was on the edge.  It did the trick because she came back with a pile of cheap ball point pens and dumped them on the counter in front of us.

I was scared and shaking.  We signed the papers.  We took Coco’s picture home. Later, in her tiny toddler voice, Cherry put her finger on her baby sister’s picture and said, “Mama, are we going to fix her little eye?”

“Yes, Cherry.  We are going to bring her home and love her and fix her eyes, so she can see everything.”

I’m not writing this to get a “You’re so good. You took the broken child” response. Although, I’ve heard that plenty of times.

I’m not writing this to point out how crass people can be. Most adoption workers are wonderful. They react with much more sensitivity and maturity than that young woman.  Thank God. If she were the norm, fewer people would choose to adopt.

I am writing this because I have Coco.

We were referred to a fabulous doctor.  The first time we met, he saw me for free without an appointment.  He looked at the picture, and said, “Go get that baby.  We can fix this.” She came home at 17 months. At 18 months, she had surgery.  When Coco opened her eyes in post-op, they were perfect.  The pediatric ICU nurses said she looked like a Chinese princess.

Coco will endure (has endured) many visits to the pediatric opthamologist.  Her surgery was successful, but strabismus is a curable condition that requires vigilance.  We still see the same doctor. (No thanks to our insurance company that doesn’t pick up the tab.)  We appreciate his skill and kindness.

When people say, “You and Bacon are so good.”  I want to make them stop.  I’m not good.  We just did the thing we were supposed to do.

This week, I saw the movie, Juno. It’s a terrific movie. You should see it.  The best moment for me is when Jennifer Garner’s character is holding the baby for the first time. She asks Juno’s step-mom, played by Allison Janney, “How do I look?”  Janney answers, “Like a new mom, scared shitless.”

That sums it up.  Just because you’re scared, doesn’t mean you should back down.  Good has a way of prevailing.  I have Coco to prove it. 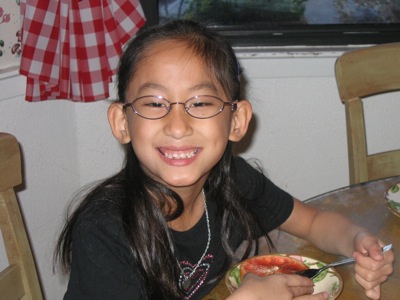