The swim meet started at four o’clock. The temperature was an even 100. Humidity hovered at 60 percent, placing the heat index somewhere around HELL. Since only kids could get in the pool, the rest of us were miserable. We suffered through freestyle, breaststroke, backstroke, and butterfly until the sun went down.

It was nine o’clock when the Girls 8 and Under Freestyle Relay began, after the bedtime of all the little girls involved. It might as well have been after my bedtime too, because it was so dark, I couldn’t see anything. Imagine the noise of a gazillion children made hyperactive by concession stand food, a grown man calling out names like a carnie worker at the state fair, and four 12 year old boys picking up, then rotating every few minutes, the canopy we were all standing under….Oh, and I still have vertigo.

Before the race, we were two kids short of having three relay teams.  Since everyone wanted to swim, the team director decided to go with it, swimming two and half teams in three lanes.  One seven year old didn’t get in line.  So there I was, standing with someone else’s kid listening to her wail about not getting to get to swim.  Holding her hand, I ran staggered as fast as I could to the far end of the pool just in time to get her into lane 6. Cherry and Coco managed to get into the water like they were supposed to, finishing in second and fourth place.

After the race, Coco didn’t get her award, so I took her back to the starting blocks. She spoke to a man with a nail bag strapped to his waist. “I didn’t get my ribbon!”

“I gave it to your teammate.” He pointed in the dark to the far end of the pool.

Holding a dripping wet, freezing, sleepy, six year old, who swam her heart out, I said, “Even if I could figure out who she swam with, I could never find her teammate in the dark. Can you give my kid a ribbon so we can go home?”

He must have recognized the Mama Bear growl in my voice because he reached into the nail bag and handed one to Coco. It wasn’t the right place, but by this time, we didn’t care.

Gathering our stuff, we slogged to the car. Bacon pulled a red wagon full of folding chairs and sunscreen. I held the hands of two very small, but triumphant baby Dolphins. On the way home, we celebrated finishing the race with strawberry slushes and ice cream. 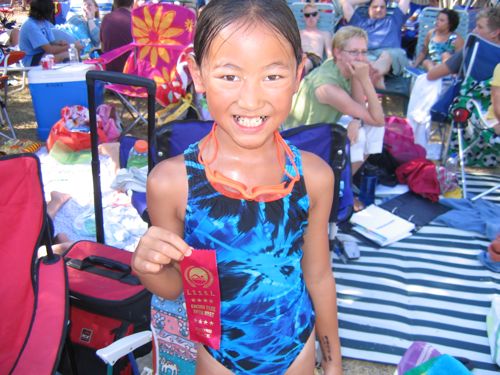 Cherry, after her first race