We opened the pop-up camping trailer for the first time in a year. It’s pretty much the way we left it. After tossing a few moldy pillows, we discovered the rest wasn’t too worse for wear. Cherry checked out the cooking utensils. Inside the silverware drawer, she found the wind up travel alarm clock.

“Papa gave this to me.” She turned it over in her hands. “I remember that day. This came from his camper.”

The clock is square with a plastic cover that opens like a locket making its own stand. Cherry opened it, and turned it over to look at the face. Her eyes were glossy with memory. She adored her Papa, my father. A year ago he made this trip with us. He watched the girls play in the creek. He made them hot chocolate in the morning. He played Go Fish with Coco. He was alive. A few months later, he was gone.

This week we’re going without him, and I’m apprehensive. I can’t not go. He’d hate that. Yet going reminds me he isn’t. I saw all of my emotions flash across my eight year old’s face. It was more than I could bear without tears. Since I’m not a crier, I said, “Put the clock back in the drawer. It’ll remind us of Papa while we’re camping.”

Cherry was obedient. She placed the clock in the drawer with the knives, forks, and spoons. I shoved the drawer shut and tried not to think about it. But it’s there, the loss as certain as the look on Cherry’s face, a tenderness too overwhelming to acknowledge.

When we get there, we’ll take the clock out and wind it, and we’ll remember. 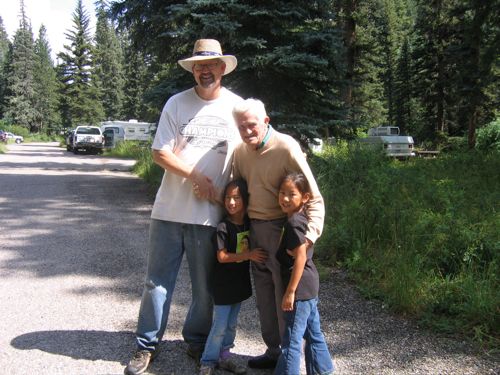 2 thoughts on “The Clock”