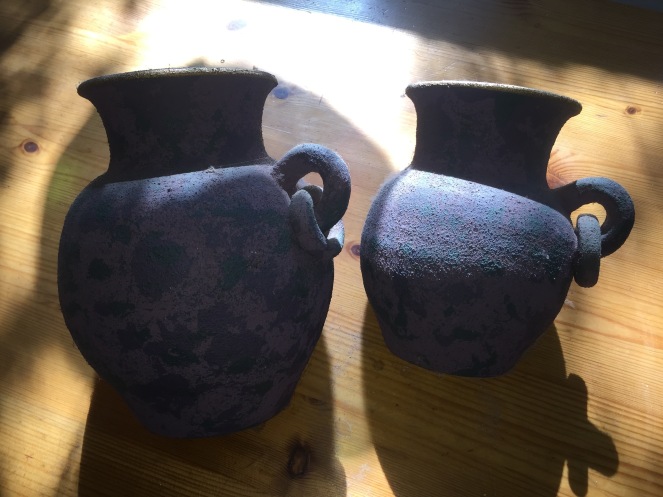 I owned a set of three decorative pots. My mother bought them in the Rio Grande Valley where my parents lived every winter, after retirement and before my mother became too sick to travel. The pottery hung on our family room wall until last week.

Cherry, my mother’s namesake, plugged her iPhone into a wall outlet; the cord tangled; the sconce above her head tumbled, and the smallest of the three fell and shattered.

When it happened, I felt like I used to feel when I crashed my bike. My mother’s been dead for thirteen years, but she’s in my thoughts all the time. Though, she occupies only a sliver of Cherry’s memory, most of it reinforced by snapshots.

I caught my daughter holding her breath, afraid to exhale.

I braced myself. Then, as if I were sprawled over the asphalt in front of my girlhood home, I stood up and checked the knees and elbows of my subconscious. No scrapes or bruises.

It wasn’t that I didn’t like the pottery anymore, or appreciate my mom, or her memory. I felt something, different. I said, “It’s okay. Now, I can hang something else here.”

I said, “There’s glass on the floor. Put your shoes on.”

That’s the second most common thing mothers say. The first is the warning, “You’re going to put an eye out,” and the third is the reminder, “Drink your milk.”

I swept up the pieces.

I’m looking for something new to hang in that spot.

One thought on “Broken Pottery”