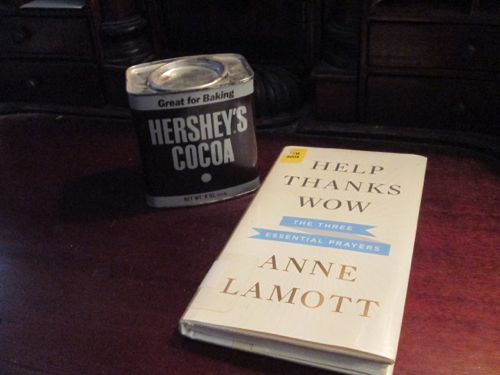 I found the chocolate tin in my dead brother’s kitchen. Packed to the top with Hershey’s, I couldn’t judge its age, but I knew it had been a while since the chocolatier packaged the powder in metal. I tossed the old spices and a rancid bottle of olive oil, but after emptying its contents, the cocoa container made it into the box of saves. It’s been sitting on my desk ever since–no good for pencils or markers. The opening isn’t wide enough, and it has that nifty lid. I don’t want to lose it.

I have a hard time letting go. Old sundry containers aside, I’m not a hoarder of objects. But I will admit to being a hoarder of memories. Of worries. Of past loves. The act weighs me down at times, and it drives my family crazy. My favorite poem is Robert Frost’s “Wild Grapes.” The final lines are my answer to anyone, sick of my rumination, who utters “Fogetaboutit.”

The mind–is not the heart,

I may yet live as I know others live,

To wish in vain to let go with the mind–

Of cares, at night, to sleep; but nothing tells me

That I need to learn to let go with the heart.

To be honest, picking up my metaphorical foot to move in a new direction stymies me. Forward momentum is my modus operandi. A twist to the left or right is difficult.

This week I read Anne Lamott’s, Help, Thanks, Wow: The Three Essential Prayers. It’s a little book, only 102 pages, but if you’ve read Bird by Bird, you know she packs wisdom between every word. Lamott classifies prayer into three categories: help, thanks, and wow. Eureka! I was thunderstruck by my own whiney simplicity. I began classifying my own internal dialogue. Guess which category won by a landslide? Psalms 121:1 says, “I will lift up mine eyes unto the hills, from whence cometh my help.” It’s great to pray, but maybe I’ve been staring at the horizon a little longer than the psalmist intended.

Not to worry. Lamott suggests a tool. She calls it a God box. Take any physical container. She admits to using her car’s glove compartment. Write the worry on a scrap of paper, shove it in the box, and close the lid.

Finally, I have a use for my brother’s cocoa tin. Now, when I can’t let go, I scribble my request on a Post-It and put it in the box. When the thought pops up again, I’m reminded. The worry is hermetically sealed, surrounded by the scent of chocolate.