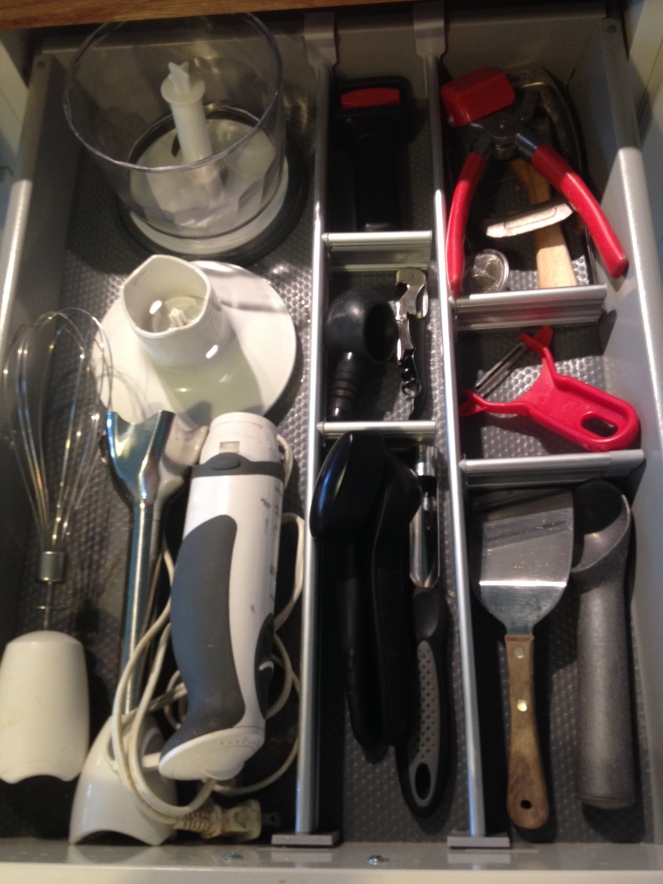 My husband never learned to put like things together or anything in the same place twice. In his preschool years, a shape-sorter toy never appeared under his family’s Christmas tree. You know, the bucket with the star-shaped, round, and triangular holes in the lid? Most toddlers are adept at dropping the appropriate hunk of plastic through the correct opening. Not Bacon. In fact, matching of any kind isn’t his forte.

Before he leaves the house everyday, my girls give him a make-over. Cherry in particular’s been know to say. “No. Just. No.” To which he replies, “What?” And Coco answers, “Change your shirt.”

That’s easy enough to handle compared to what happens when he unloads the dishwasher. No kitchen tool is ever returned to its original location. In Bacon’s world, a wire whisk is a refugee, camping out in a nebulous borderland, never to return to its true home.

When Bacon reads this, I can predict his exact response. He’ll say what he always says, “If it bothers you so much that I can’t remember where things go, I just won’t put the dishes away.” So before I go on, let me reassure him, “It won’t work. Pleading ignorance is no excuse.”

We have one utensil drawer divided with IKEA drawer dividers. The immersion blender fits on the left. Corkscrew and wine stopper in a slot. Can opener and apple corer in a slot. Ice cream scoop and small spatula in a slot. At any time, I can open the drawer and reach for exactly the tool I need without a glance. Unless . . .

Despite this innate flaw in his character, we’ve survived twenty plus years of marriage. I suppose things could be worse.